Home > Articles>Entertainment>The Best of Armin Only The Best of Armin Only 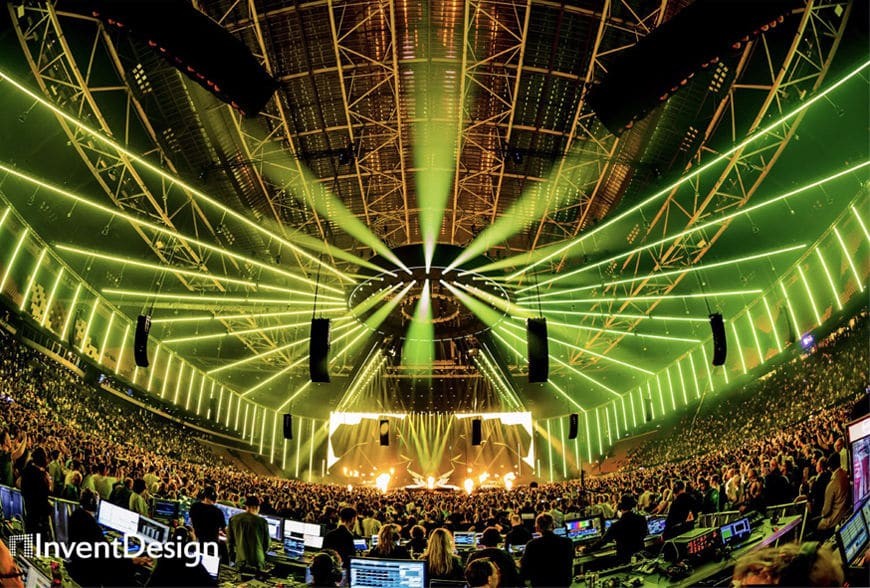 Amsterdam, 22 May 2017 -  Armin van Buuren spinned the records on 12 and 13 May during his show ‘The Best of Armin Only’ in the Johan Cruijff Arena. For the second time in 6 months, InventDesign was the preferred party to cater the LEDs for yet another spectacular lightshow. Last October, we catered the lights for the Amsterdam Music Festival, which also took place in the Johan Cruijff Arena.

The special lightdesign, which was designed by 250K for the show, didn’t stop with an impressive stage. InventDesign provided the full length and width of the Johan Cruijff Arena with vertical and horizontal pendant LED strips, with the shortest vertical variations being at least 8 meters long. InventDesign is one of the few European companies that can handle pixel driven LED’s of this size. But the real challenge was to create and test the entire lighting installation within the short timeframe that was given to us. This does not just include the preparation of the M-series pixel strips, and customization of the control boxes, but also coming up with a safe, constructive solution to hang the LED strips vertically above the public.

Because the Arena is so big, and the lights had to cover almost the entire Arena, we decided on decentralized control boxes. For this reason, InventDesign assembled 129 smaller control boxes – each equipped with a 500W/24V alimentation and DiGidot C4 Show controller-, with which the 808 M-series pixel strips and 318 meter RGB LED strip could be controlled more easy. Thanks to the great co-operation during the Amsterdam Music Festival, Alda Events entrusted the us again for this project. At InventDesign, we did what we promised and managed to create a cleverly constructed, and trustworthy installation, with the result of a gigantic light spectacle. Stefan Verhoef, general director of InventDesign, said: “We would have never been able to realize this great project without lighting designers André Beekmans and Marc Heinz, and of course our technical partner 4Light. Therefore, I would like to thank them and our client Alda Events for yet again a great collaboration!”.